And the results are in…

The British Drilling Association (BDA) is pleased to bring you feedback from the first BDA member survey, which was carried out and managed by Membership Coordinator Carl Gawtry, during November and December 2020. Carl has done a great job pulling the data together, and as we dig deeper into the findings, the BDA will present them to you through a series of articles, of which this is the first.

So, with the data collated and assessed, it is to the great relief to the Management Committee, that the survey found that the BDA membership is overwhelmingly positive about its’ Association, although the BDA needs to raise the number of opinions from ‘ok’ indicated by a +1 rating towards the +5 ‘very good’ rating: 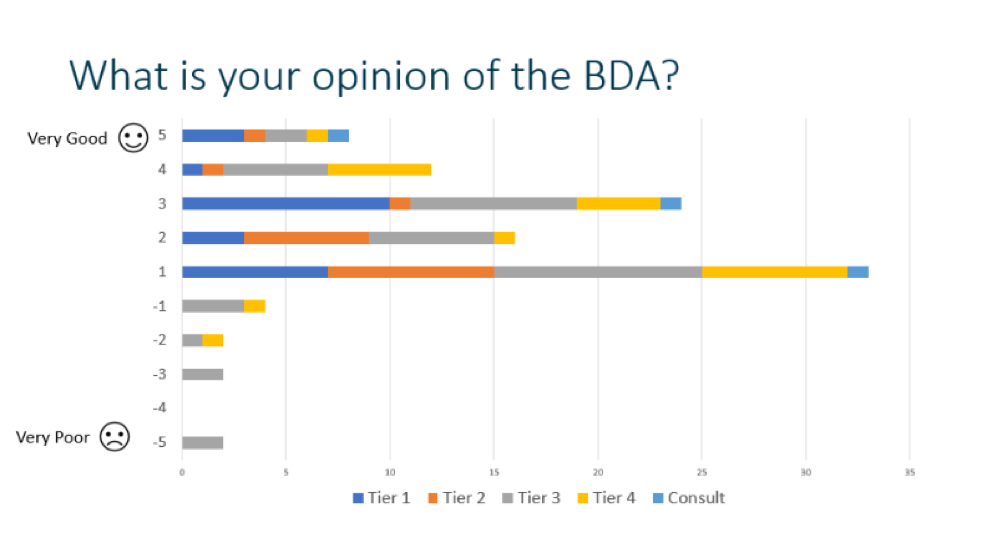 The aim of the survey was not to overload members with questions, but more to establish a benchmark and identify the areas that Members would like to see improved and the BDA is grateful for the 110+ members that engaged and gave feedback.

Results-wise, communication and contact were frequently raised as issues that the BDA needs to improve on. Some smaller companies felt that their needs were ignored, and that larger companies dominated the Association’s focus. Unfortunately, it is true that the larger businesses have generally provided the time and resources for their employees to give up their time to contribute to the aims of the Association and therefore it is seen that these companies drive the agenda forward through the work of the various sub-committees. To deliver the Association’s primary objective of ‘improving standards in health and safety, quality and technical proficiency’, the BDA has for many years worked to influence regulators and specifiers, project owners, clients, and customers and this has been led by the efforts of companies that have the resources to contribute.

However, clearly there is a problem, and there is acknowledgment and an effort amongst all committee members that the BDA needs to do more to represent ALL members.

The survey also found that the Seminars and other networking and socialising events that the BDA arranges were well liked and commended. The events are important, as they raise the profile of our sector and enable interaction between Members and clients and regulatory bodies, so it is good to see praise for this aspect of the BDA’s activities. There was also positive feedback to the eNewsletters, Safety Alerts and news Bulletins issued by the Association too, so communication is improving.

An important part of the survey was to establish the outlook for the future of member’s businesses. This area is important to help guide the BDA on which areas it needs to focus on going forward, and include areas such as recruitment and training, forecasting Auditing capacity, size of the market, number of operational rigs and so on. The good news is, especially at a time of such economic uncertainty for sectors such as the travel, leisure, and hospitality industries, is that our membership is optimistic for the future:

As was expected, it being such a large aspect of the BDA’s aims, inevitably there was much feedback about the BDA Audit. Some was positive and some negative, but unfortunately some comments still support the feeling, or the myth, that it is a ‘money-making exercise for the BDA’, still endure.

The feedback regarding the BDA Audit, due to its importance, will be discussed in detail in a separate article, which will be published shortly.

Although the survey is closed, members are still encouraged to express their views, thoughts, and opinions – good or bad – directly to the BDA. The survey provides a snapshot of views at the time it was taken, but feedback is always welcome. It is YOUR Association – you shape it, and guide its direction so make yourself heard!